As seen on the Vancouver Sun: https://vancouversun.com/sponsored/travel-sponsored/experience-the-millenia-old-culture-of-india-with-this-incredible-journey

The popular tourist circuit of Delhi, Jaipur, Ranthambhore, Agra, Khajuraho and Varanasi in northern India offers a captivating taste of this beguiling country. The bustling Indian capital of New Delhi is believed to be the eighth version of the city to exist on the same spot, as dynasty after ruling dynasty destroyed and rebuilt it as their seat of power. Wandering through the narrow lanes of Chandni Chowk, after a tour of the Red Fort and a peek into the imposing Jama Masjid mosque, it is possible to peel back the layers of history. Between the neighbourhoods of old and new Delhi, this city straddles the past and the present, making it the perfect place to start exploring India. Add to the mix the aroma of the delectable street food and the glitter of the colourful bazaars. Jaipur is known as India’s Pink City, after the colour of the red sandstone used to build most of the important monuments in the heart of town. This city has been in existence since the 12th century, and many of its important landmarks are remnants of that age: City Palace, with its captivating museum; Hawa Mahal, the palace of winds; Jantar Mantar, an ancient astronomical observatory; and just 10 miles away, Amer Fort, with its scintillating Sheesh Mahal (Palace of Mirrors), lush gardens and ornate pavilions. Jaipur’s street markets selling block-printed fabrics, mirrorwork slippers and silver jewellery, are among India’s best. The Royal Bengal Tiger, truly royal, truly majestic, is the undisputed star of Ranthambhore. It is fascinating to see how the former hunting lodge of the local kings is now a protected reserve, with one of the highest density of tigers in the country. The dry deciduous ecosystem of the National Park is also home to a wide variety of wildlife and birdlife, including the rhesus macaque, sambar deer and wild boar, and several species of owls, hornbills, eagles, kingfishers and parakeets. Another key attraction inside the Ranthambhore reserve is the 10th century fort, towering over this part of the forest. India’s most recognized monument, the 17th century Taj Mahal, is what stories of eternal romance are about. At any time of the day, the air is thick with the fascinating legends about Mughal emperor Shah Jahan’s love for his deceased wife, Mumtaz Mahal, whose death he mourned through this magnificent sonnet in stone. Along with the Taj, the old part of Agra has several impressive Mughal era monuments like the UNESCO-listed Agra Fort and the Itmad-ud-daula tomb built out of solid white marble even before the Taj. 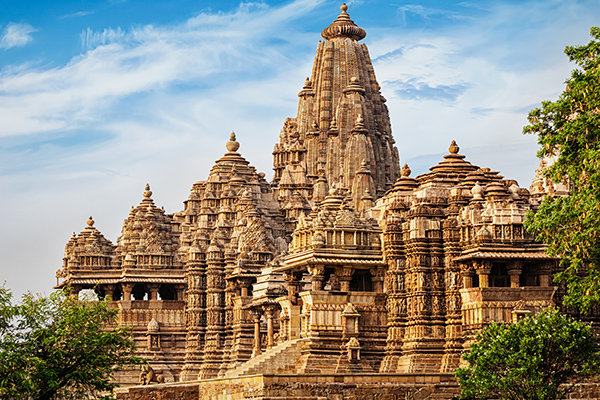 Varanasi, on the banks of the holy River Ganges, revered by Hindus as the Ganga, is all about the eternal circle of life and death. Also known locally by its old names of Benares or Kashi, Varanasi has been India’s spiritual capital for centuries now. The Ganga Arti, the prayer ceremony to the river carried out every morning and evening, is a feast for the senses, with the sounds of clanging bells and mesmeric chants, the sight of dozens of flaming lamps and the heady smell of incense. Varanasi is another town known for its street food, as well as its unique silk weaving traditions.