Varanasi, formerly known as Benares is the oldest living city in India and home to one of the most time-honoured, mysterious cultures in the world. In India, a land besotted with spiritual matters, there is no holier a place than Varanasi. Along the river Ganges, believed by most Hindus to be the most sacred of waterways, you will witness the rituals of the people as they offer their obeisance to the sun or ‘puja’ at the first light of day and the cremation rituals at night. Death is not seen as morbid here, rather, a journey from the physical to the non-physical. Varanasi is also associated with Buddha in that this is where the great teacher delivered his first message to his followers.

You will take a short flight to the holy city of Varanasi, the religious capital of Hinduism and one of the oldest living cities in the world. Arrive and transfer to our hotel.

In the early evening we will take a close look at the banks of the Ganges to witness the devotional ceremony of Aarti performed by thousands of devout Hindus. The incredible chanting of prayers fills the air as does the rhythmic drumming and sounds of bells from temples across the Holy Ganges.

In the early evening we will go to the banks of the Ganges to witness the devotional ceremony of Aarti performed by devout Hindus. Afterwards, we will return to the hotel where we will enjoy dinner. 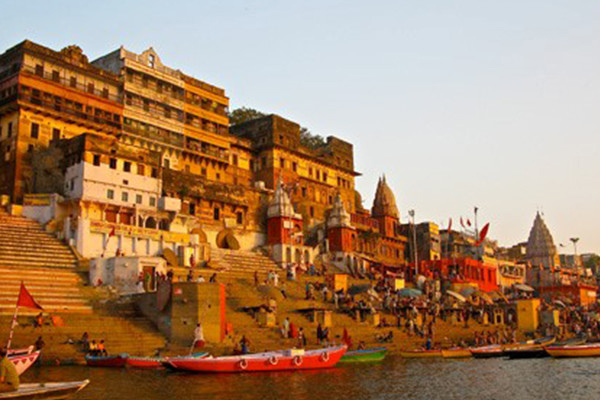 A memorable day ahead as we leave early in the morning to board our boat for a ride along the Ganges to see the bathing Ghats (river bank) & cremation site. We will watch the sunrise on the riverfront from a boat which can be a moving spiritual experience as you witness the worship and sites along the river. Life on the Ghats is bound by an endless string of rituals and the ever-changing aspects of the river and the wide landscapes throughout the area have fascinated visitors from all over the world. You will become entranced by the sights and sounds of those worshipping in this amazingly beautiful, mysterious, and ancient place. We will also visit Mother Teresa’s missionary before returning to the hotel for breakfast.

In the afternoon, we enjoy a guided excursion to Sarnath, a centre of Buddhist learning and the buried Buddhist city where Buddha preached his first sermon. After attaining enlightenment at Bodh Gaya, the Buddha went to Sarnath and it was here that he preached his first discourse in the deer park and set in motion the ‘Wheel of the Dharma’. It is one of the most holy sites because it is believed that in this place the stream of the Buddha’s teaching first flowed. Sarnath was a renowned school of learning from the 16th century BC to the 12th century AD. Visit the ruins, the stupa, the Buddhist temple & the museum. See the Ashok Pillar at the museum with its four guardian lions, now the national emblem to acknowledge India’s independence.

After breakfast we leave for the airport for out flight to Delhi. Arrive and transfer to your day hotel until your flight departs for home.

Add this to your tour!

This is a tour extension. Add this on to a tour of your liking. Contact us on how you can extend your journey.

Talk to a Travel Specialist

All small-group journeys are guaranteed to operate at its maximum guest limit, and if the price goes down after you book, we’ll refund the difference.

Ask about how you can protect your journey with our Travel Protection Program.